We recently had Roo's first parents evening. We totally did not know what to expect as we knew it would be nothing like our other children where we are told how well they are doing in certain subjects, how great their reading and writing is coming on, about how they are a credit to the school etc and we always came away feeling so proud of how well they are doing & behaving like model students (if only they behaved like model children at home instead but that's unrealistic isn't it?!)

So off we went to meet his teacher and she at first told us how well he has settled into the class, getting used to the routines.

He has come on so much socially

She said that even though he tends to play on his own at times he is also starting to interact with his peers, plays with them at times, is well known with the older children especially a pair of twins in the older years who like to help him. We told her how we have seen this in the playground as sometimes when we are walking along the kids will yell out "hello Reuben" and do the sign for "hello"...its lovely to see and also to hear that he is being accepted by the other children.

He can use scissors really well, too well to the point they have to sellotape his work back together!

She explained that they were more or less letting him do his own thing, getting him to join in when he can, when they do reading she says they still get Roo involved by sitting with them as they read, listening with headphones. Although he cannot write or draw he does really well with a pen and tries hard. She mentioned how well he can use scissors and how quick he is with them! She said if you let him he would just keep cutting until everything is really small, she got up to get a piece of his work and right enough you could see they had to sellotape it all back together to make it back to what it should be!

He can be stubborn

She explained how he can be stubborn, refusing to do things but that they were working ways on getting him to do what they wanted. She said for example when it was time to sit they would say "sit" and also do the sit sign and he would just remain standing...she said it could go on all day until she worked out that if she went behind Roo and said "sit" and do the sign he would sit down! Another time they were in gym and he stood at the door refusing to walk back to class when they had finished so they just switched of the lights and started walking a wee bit away down the corridor and he then would come towards them. Exactly what we have to do at home.

He is quite funny & is a right character

She had us laughing at some of the antics Roo has been getting up to! She said one time Roo was standing in front of her sitting in her chair and she asked him to do something and he just put his head towards her head and stared at her! If she spoke to the class saying "sit down everyone" Roo would copy her and repeat "sit down" to the others. He will repeat words/sayings that are said to him back to them. Once while they were busy getting tidied up she realised Roo had gone a walkabout and she rushed out to find him sitting in the second year pupils area trying on all their wellies!

She also spoke about how she has requested a meeting with another teacher who is in charge of the Hub (special needs provision which is attached to the school) to ask if they need to start thinking about getting a programme sorted to tailor to Roo needs or to continue leaving him as he is in doing his own thing and joining in if he wished. She also mentioned that at times they have tried him in certain activities without an adult just for him and she feels that its not working too well and that he needs an adult with him all the time to make sure he is doing what he is supposed to be doing otherwise he just wanders off or goes off and does something else so she is going to speak to the other teacher about the support. She also said that in time we would likely need to think about specialist provision but stressed that he was doing extremely well currently in mainstream with support so are happy to keep him as he is at this moment in time but just wanted us to be prepared for that possibility in future.

A few days before the meeting we were invited along with the other parents to come into the class and the children were to show us their work. I went with my mum as my husband couldn't get time off work. Roo greeted us with his huge smile and we came across this table that had stones on it all which had been painted by all the children. My mum asked "where's Reuben's stone?" & pointed at the stones....Roo stood and looked at them and slowly he picked up one and to my amazement when I turned it over to check the name underneath it was indeed his. I was so proud.

We walked around the classroom looking at the work on the walls..you could tell which were Roo's as they were scribbles but they still proudly displayed his work alongside the other children. I was so proud.

Then the kids all had to sing songs to the parents...Roo wouldn't sit,  stood up and watched the kids sing. I was proud to see him as part of the class, it didn't bother me that he didn't want to take part. Then the next song they all stood up as had to do actions alongside singing and again Roo didn't take part but when they did the sticking bum out part of the song  Roo joined in smiling sticking his bum out!! This made me laugh. He can be so cheeky at times. I was so proud. 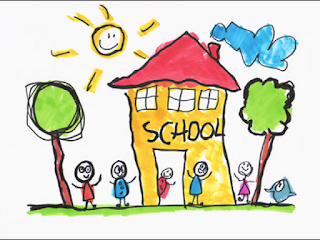 While this isn't a normal parents evening that parents normally get it was a really good parents meeting with lots of positives and while he will never be academic, read or write like his peers, his brothers he is doing amazingly and I am so proud of him. I thought I would feel sad about how different he is to the others but I don't, I just feel happy that his teacher actually "knows" Roo and what he is like, I came away feeling so so proud of my boy. 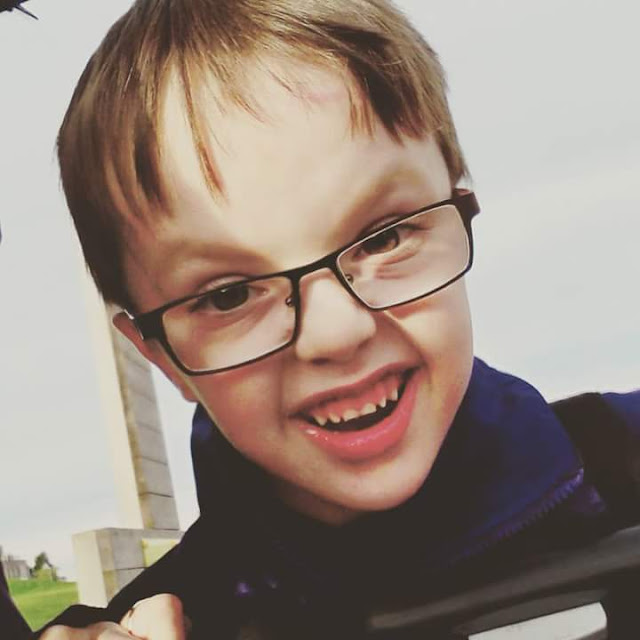